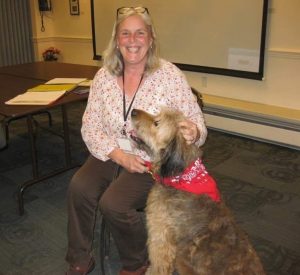 Ann Ackley first became involved with the UVDART during 2011 when the
Companion Animal Mobile Equipment Trailer (CAMET) was based at Lucy
Mackenzie Humane Society. Ann then joined the UVDART and rapidly became a
Board member. In March of 2012, Ann became the Vice Chair, a critical role
assisting the current Chair who had many job-related commitments. Ann became the UVDART Board Chair in November of 2012 and held this position for next six
years.

Ann also joined VDART as one of the two UVDART representatives around
December of 2014, rising to Vice Chair of that Board. She religiously attended the Board Meetings of both teams through early 2020 until severe weather intervened.

Ann also led several Disaster Responses (DR’s) involving shelter operations and statewide drills. During these days, she also religiously carried the UVDART Beeper which was used for activation of the team. When the VT-Alert system replaced the beeper, she remained a primary contact person and regularly attended the formal Team training events.
We lost Ann to cancer in 2020 after a tough two-year fight. She is and will always be missed. Ann served well with both class and distinction, and was always ready to help with a smile and a kind word.

Donations can be made in her honor

The Vermont Disaster Animal Response Team (VDART) was established in 2007 in order to strengthen and support the state’s capacity to respond to animal needs in the event of a disaster. We provide vital resources and advice to pet owners, animal-related businesses and non-profits, local communities, and state agencies in this area. END_OF_DOCUMENT_TOKEN_TO_BE_REPLACED