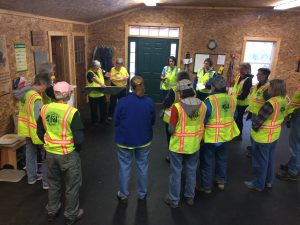 The Vermont Disaster Animal Response Team (VDART), a statewide non-profit that helps animals impacted by natural and man-made disasters, is excited to announce that its board recently approved the application of the newly formed Northeast Kingdom Disaster Animal Response Team (NEK-DART). NEK-DART will join VDART’s current network of chartered regional response teams for animals across the state, which are currently located in Chittenden County, Central Vermont, the Upper Valley, and Windham County. NEK-DART’s service area will include Caledonia, Essex, and Orleans counties.

“We are thrilled to be able to launch a chapter of VDART in the Northeast Kingdom”, said Giovanna Zaccaria, who will be co-leading the team with Chrysta Murray. “The Northeast Kingdom covers a vast rural area in the eastern corner of Vermont bordering Canada. In the event of a disaster, it will be imperative to offer timely support to the animals and individuals residing here that may not be available from other areas of the state. On a personal level, Chrysta and I are lifelong animal lovers. Between our two households we have four dogs, four cats, one hedgehog and one turtle! We are deeply committed to building a local resource to help support our animal loving neighbors in the event of a disaster as we would want to be supported and thank VDART for allowing us to be a part of their mission.” VDART was formed in 2007 after Hurricane Katrina demonstrated the severe negative impact that not planning for animals in disasters can have on not only animals, but the people who care for them. Thousands of animals died needlessly in Louisiana and Mississippi without proper planning, and human lives were also lost because owners refused to leave their pets behind.

Since the pandemic hit in March, 2020, VDART has focused efforts on fundraising for pet food to provide to food insecure pet families here in Vermont. Response Team volunteers have coordinated the dispersal of thousands of pounds of pet food to local food pantries, animal shelters and homeless shelters in every corner of the state, including the Northeast Kingdom.

If you’re interested in volunteering with the NEK-DART or another response team in your community, go to www.VermontDART.org/volunteer to learn more and apply.

The Vermont Disaster Animal Response Team (VDART) was established in 2007 in order to strengthen and support the state’s capacity to respond to animal needs in the event of a disaster. We provide vital resources and advice to pet owners, animal-related businesses and non-profits, local communities, and state agencies in this area. END_OF_DOCUMENT_TOKEN_TO_BE_REPLACED