In preparation for a true emergency or disaster, where residents must evacuate their home with their pets, the Vermont Disaster Animal Response Team recently hosted two trainings for potential volunteers interested in helping with emergency pet sheltering needs. 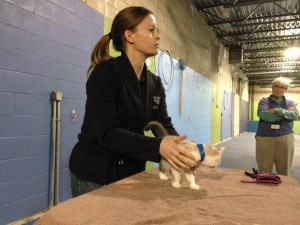 The first session was held on May 18th at Yankee Dog Training and Daycare in Brattleboro,  and the second was held on June 22nd at the South Burlington Police Department.  Both workshops were funded by a generous grant from the VT Department of Public Safety. 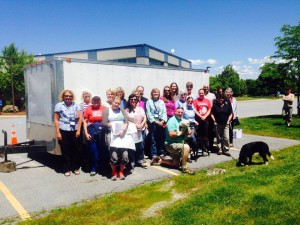 Following lunch, an emergency drill was conducted with live animals. The complexities of running a disaster shelter quickly became apparent to volunteers, but all completed the course, demonstrating an impressive and quick mastery of disaster animal response issues. VDART plans to host more Emergency Animal Sheltering and related workshops  in various locations throughout the state.

The organization is working to form regional teams across the state and needs your help to create an effective statewide response mechanism to help animals in times of disaster. Please consider becoming part of VDART today and/or making a small donation. Check out In The News  for upcoming events and training opportunities.

The Vermont Disaster Animal Response Team (VDART) was established in 2007 in order to strengthen and support the state’s capacity to respond to animal needs in the event of a disaster. We provide vital resources and advice to pet owners, animal-related businesses and non-profits, local communities, and state agencies in this area. END_OF_DOCUMENT_TOKEN_TO_BE_REPLACED