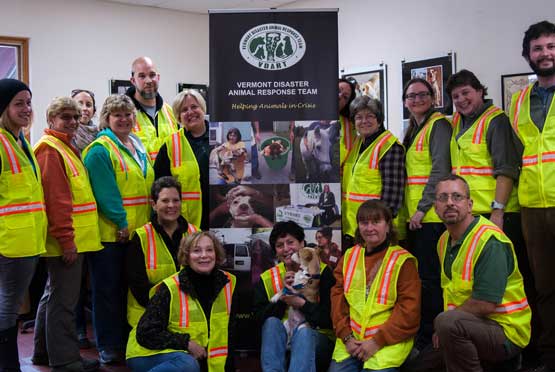 The Chittenden County Disaster Animal Response Team (CCDART) will cover both Chittenden and Grand Isle Counties, and the Windham Disaster Animal Response Team (WinDART) will cover Windham County. The new teams will join VDART’s first regional response team, the Upper Valley DART, which was formed in 2013 and covers areas in both Vermont and New Hampshire. “We are thrilled to be tripling our response capabilities for animals impacted by disaster here in Vermont by adding these additional teams,” said VDART board chair, Joanne Bourbeau, who also leads the new Windham team. “Our volunteers are energized to create a safety network for pets in their communities, as well as be available for other areas of the state when disaster strikes.” The Windham Disaster Animal Response Team (pictured here) recently hosted a free training for volunteers interested in joining the team at the Windham County Humane Society (WCHS) in Brattleboro. Volunteers learned how to identify stress signals in dogs, cats and rabbits, and used VDART’s standard operating procedures and forms to set up a mock temporary shelter for displaced animals. If you’re interested in joining a regional team near you, contact Bourbeau by email or call 802-368-2790. Funding for the development and outfitting of these new teams, along with the development of outreach materials, was made possible with the generous support of the American Society for the Prevention of Cruelty to Animals (ASPCA).
PrevPrevious10 Things for Pet Owners to Consider When Preparing For a Disaster
NextVDART Adopts New Emergency Notification System for VolunteersNext

The Vermont Disaster Animal Response Team (VDART) was established in 2007 in order to strengthen and support the state’s capacity to respond to animal needs in the event of a disaster. We provide vital resources and advice to pet owners, animal-related businesses and non-profits, local communities, and state agencies in this area. END_OF_DOCUMENT_TOKEN_TO_BE_REPLACED