The UVDART team lost a valued member and leader, Ann Ackley, in 2020. Ann was instrumental in UVDART’s early and formative years and served as Chair for several years. In her honor, the Ann Ackley Memorial Animal Support Fund was established.  Read more here.

Our UVDART meetings are scheduled for the 4th Tuesday of the month at 7 pm. Please visit our Facebook page for updates, or email uvdart@vermontdart.org if you’re interested in joining us. 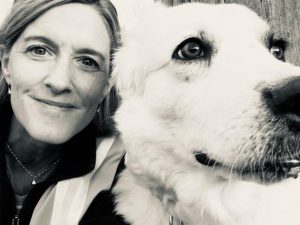 Liz lives in Cornish, NH and has been serving on the Board of UVDART since 2014.  She is the sole proprietor of her professional pet sitting business, Creature Companion, which has kept her busy caring for dogs, cats, birds, fish, rabbits, sheep, goats, pigs, chickens, alpacas, etc. since 2005.  Liz shares her home with her husband, Sugar the mutt, and Mojo the cat.  She also volunteers with Aging In Place in Cornish.  In her spare time, she enjoys music, traveling, spending time with family and friends, hiking, snowshoeing, reading, gardening, and walking her own dog. 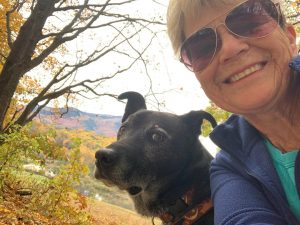 Sue lives in Windsor, VT with her husband and favorite dog ever, Bailey. She works as an emergency room nurse at Mt Ascutney Hospital. Sue loves live music, hiking or snowshoeing with Bailey, biking and gardening, reading, or just hanging out with friends or family in the pool or out on the deck.  She has been on the board of UVDART since 2014. 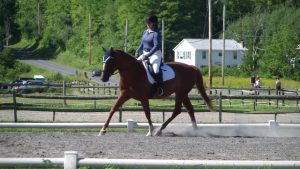 Melissa Drye has been an active board member on the Upper Valley Disaster Animal Response Team since 2017. She works as a Director of Pharmacy at Valley Regional Hospital in Claremont, NH.  Melissa is married to husband, John and they have two little boys, Jason and Ethan. They run a small family farm in their spare time. Melissa brings 3 decades of large and small animal experience to the team as well as an Associate’s Degree in Equine Studies and a Bachelor’s Degree in Animal Science from SUNY Cobleskill. Additionally, Melissa volunteers with the Four Winds Program, sits on the school board for the Cornish Elementary School, and is a 4H leader for Horse Huggers 4H Club.

Heather has been a member of the UVDART board since 2017. A Springfield, VT resident, she works for the Vermont Department of Health as an Emergency Preparedness Specialist. Her past animal welfare work includes 14 years as a professional cat trapper as well as 11 years working with companion animals in emergency rescue and sheltering. She is the current mom of four human children, four feisty felines and a dog who finds herself sorely outnumbered. Her hobbies include running, writing, cooking and target shooting.

After retiring from public school administration and moving to Vermont in 1999, he became re-involved with the American Red Cross in both Disaster Mental Health (DMH), Governmental & Partner Liaison and the Upper Valley Disaster Action Team (DAT). He also has deployed to several National Disaster Relief Operations including 9/11, Hurricanes, the Newtown School shooting and other events. Jack has served several years as Board Chair for the Central Vermont and New Hampshire Valley Chapter which has now been absorbed into the Northern New England Region. He currently serves primarily as the National ARC appointed DMH Advisor for Vermont.

Jack has a long love of dogs, currently a Newfoundland and Saint Bernard, both rescues.  During his extensive experience with the Red Cross, it quickly became evident, especially after Hurricane Katrina, that helping animals during a disaster was a priority.

In 2004, he and a few others began the building of what is now the Upper Valley Disaster Animal Response Team (UVDART).  Soon a committee, sponsored by the Vermont Agency of Agriculture, Farms and Markets, was formed with the goal of creating a state level DART team.  Jack served on this committee during its initial stages and went on to become its first Board Chair after formal incorporation in July of 2009. He was involved in the original conceptual model, dealt with all areas of its growth including the IRS Group Letter, which helps permit VDART to charter its regional response teams such as UVDART. He currently serves as Advisor to both VDART and UVDART while undertaking a variety of special developmental projects.

Jack also served as a Licensed Psychologist and School Psychologist as well as 30 plus years, both full and part time, as a graduate professor training psychologists. His administrative background, which includes extensive formal training, was primarily in the public schools as a Regional Executive Director (Superintendent) and Director of Special Education. It included the building and supervision of a residential treatment center for severely disturbed adolescents as well as many related programs. He has also served as a volunteer consultant to a variety of nonprofit boards.

The Vermont Disaster Animal Response Team (VDART) was established in 2007 in order to strengthen and support the state’s capacity to respond to animal needs in the event of a disaster. We provide vital resources and advice to pet owners, animal-related businesses and non-profits, local communities, and state agencies in this area. END_OF_DOCUMENT_TOKEN_TO_BE_REPLACED